It will take me weeks and weeks to share all the wonderful places and pics from this summer's tour--which isn't over yet even now!  So today I'm making a valiant effort to cover a bit more of the photos from Krakow. ... Not to confuse anyone, of course, but I'm posting pics from Krakow from Bilbao, as it were... The phrase has a lovely ring to it, no?


And the rest are from Krakow's Old Town (not to be confused with the Kazimierz). 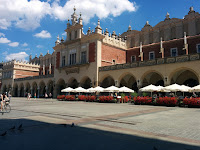 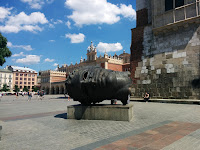 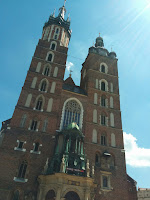 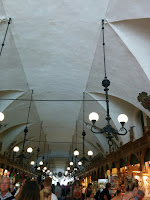 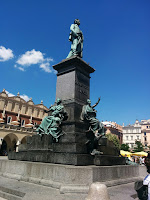 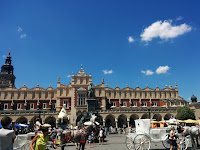 What I'm reading: Montalbano's First Case and Other Stories

What I'm working on: Revisiting Desdemona
Posted by Unknown at Tuesday, July 12, 2016 No comments:

More photos from Krakow and Warsaw to come, including performance pics, but before then, a post about the fabulous production I saw tonight of the rarely-performed-today--but formerly very popular--opera, La Juive (1835) by Halevy--himself the son of a cantor. It's tragic French grand opera at its best, with themes of thwarted love, betrayal, anti-clericalism, and religious in/tolerance at the fore.

It was a very interesting and fun multilingual experience for me as I was using at least four parts of my brain simultaneously: listening to and watching an opera that was being sung in French with German supertitles.

Other than a few odd missteps in the staging (by Calixto Bieito), tonight's was a production for the ages: ravishing singing, incredible use of light and shadows, glorious music, moving acting, beautiful playing.  (The few missteps in the staging?  Periodic tussling over a jacket; odd catfight-like tussling between the two women; the regular throwing of oneself or other characters onstage that so often  seems to be de rigeur for Regitheater; and the odd Passover scene which had Eleazar perform something that looked more like a cross between an Ash Wed. ceremony and Communion).

The score is demanding of all the principals, and in this production, the singers rose to the challenge, with Roberto Alagna as Eleazar--his French diction was a glory to listen to, so absolutely clean, and clear--Vera-Lotte Boecker as the coloratura Princess, Ain Ainger as Brogni, John Osborn as Leopold, and Aleksandra Kurzak as Rachel, La Juive.

Featuring stellar orchestration, the score also includes a lovely a cappella chorus and some gorgeous ensembles--duos for the two female leads and the two male leads, plus a show-stopping trio.  The writing for female voices made me ponder yet again what it is that makes the French so good at writing ensemble music for women's voices...

So why isn't it done any more? Did tastes change? Perhaps. Did the out-and-out racism start to bother audiences? Unlikely.

(As an aside: the most racist depiction is of Eleazar who is shown as a money-grubbing, Christian-hating, vengeful SOB, redeemed only by his love of Rachel, whom he has raised as his daughter but who (major spoiler here), unbeknownst to anyone else, is not. From the get-go, the opera makes it very clear that Eleazer has ample reason to be angry as all get-out.)

To look at the flip side, was it the rise of anti-semitism and the Nazis that dropped the work from the operatic Top-10?  Probably. From what I've read, it was wildly popular for a century and then disappeared from the rep sometime in the 30s...hmmm.

Methinks mesmells a racist rat--yet another way in which the Nazi purge of Jewish cultural references  (not to mention those millions of people along the way) shifted the narrative of music history, and not in a good way, either.  To the Bavarian State Opera's credit, they had a talk afterwards led by the dramaturge (although that may actually be a regular BSO feature that I don't know about, since I'm not a local). In this case, a theologian spoke a few eloquently relevant words; it looked like a good 60-70 audience members came.  I stayed for a bit, until I got too tired to follow the different accents in the German-language discussion.

And, at least in my opinion, there is no doubt that this work should be in the recurring repertory for all the major opera houses that have the resources to do 19th century French grand opera.

After having lived closely with the themes and music of Ensemble for These Times' Jewish Music and Poetry Project for much of the past decade--performing music by composers killed in the Holocaust as well as having just come from performing at the Krakow Culture Festival (and a short visit at the amazing POLIN Museum in Warsaw)--I felt as if seeing La Juive fit well into the fabric of my artistic life: it gave a funhouse view of the same historical issues from a different angle, and a very timely message.

The point of the Munich production was a good one, and a point that sadly needs emphasizing in today's xenophobic, us-vs-them, Brexiting, religious-intolerance-filled world that feels in some ways scarily like a 1930s redux: racism and hate ruin lives.  Period.

What I'm listening to: La Juive!

What I'm working on: revisiting Desdemona, now that the concerts in Krakow are over, before diving into E4TT's fall rep once I go home.
Posted by Unknown at Monday, July 04, 2016 No comments: