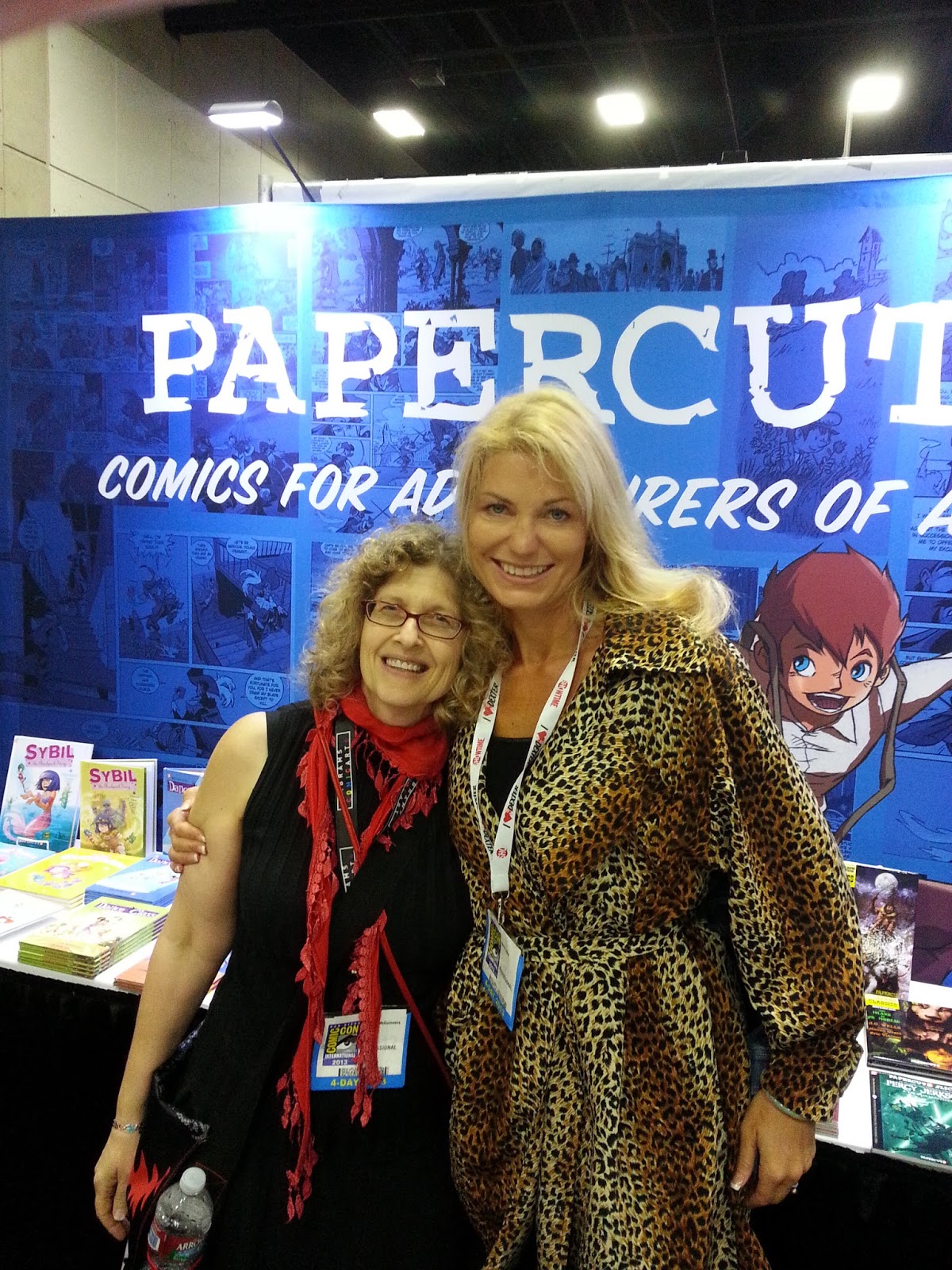 Imagine 100,000 or so steam punk, graphic novel, comix, animation, sci fi/ fantasy and film folks flitting around in a--here's that word again--huge convention center...with costumes galore, give-away bags and swag at the ready, and you'll have a glimmer of a glimpse of the scene. Although I occasionally thought about posting on my occasional blog, there were so many panels to go to, booths to visit, books to investigate, new friends and colleagues to meet,  family to enjoy, and old friends and colleagues to say hello to, that I'm just starting to recover a week later.  Whew!  I need a vacation from my vacation ;).  Can't wait 'til next year!

One of those new friends is actress Arlene Newman-van Asperen--snapshot of us above at the Papercutz booth--not too far from the Star Trek booth, for that matter. My spouse couldn't resist Enterprise pinky rings and I... well, an Emily the Strange messenger bag had my name on it after successfully singing its siren song to me.  Yes,indeedie, I have that fab bag slung across my shoulder with a water bottle stuck in the pocket.  And the cool thing is that Emily the Strange's booth had a giveaway and I won a great hoodie. Gotta love Comic Con ;).

And one of those old friends, below, is Jim Salicrup, at that same Papercutz booth. If you like graphic novels for kids, check out Papercutz' Ernest and Rebecca, Geronimo Stilton, Thea Stilton, Annoying Orange Smurfs, and more.  Over at NBM's booth for grown-ups, I bumped into some great new or at least new-to-me GNs on display: Persia Blues, Stargazing Dog, Philosophy: a Discovery in Comics.  Can't wait to read them, along with the books I brought back from San Diego. 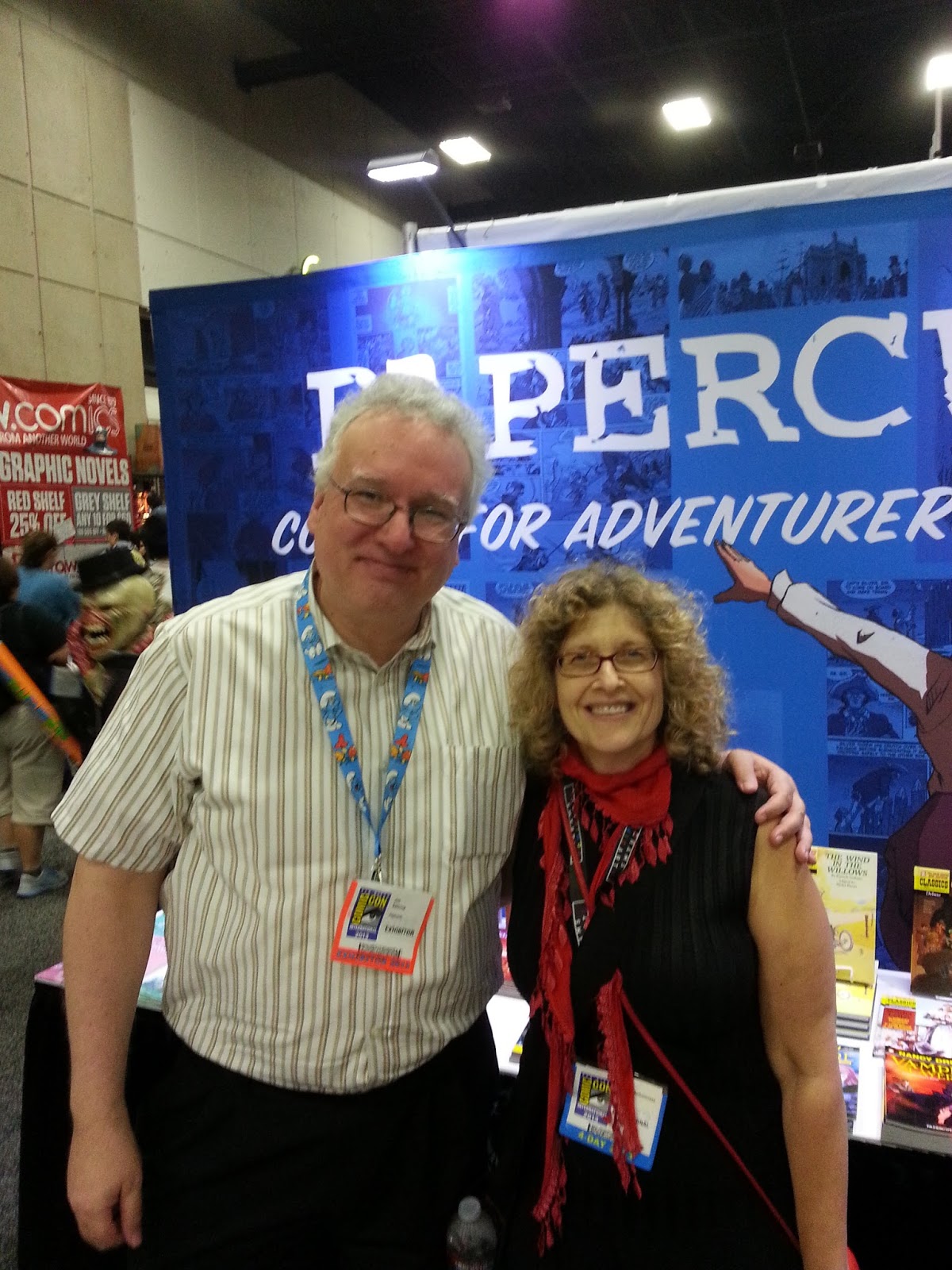 Back on earth, aka the Bay Area, I saw West Edge Opera's creepy production of Benjamin Britten's The Turn of the Screw. Based on the Henry James ghost story of the same name, the chamber opera uses a small cast and a reduced orchestra that becomes a palpable character in its own right, an instrumental Greek chorus that foreshadows and reflects upon the onstage drama.  (The regular disclaimer--many of the WEO folks are my friends and colleagues...)

One of the challenges in doing a horror story from another era has to do with changing sensibilities. Given the horrors we see on today's big screen, let alone the real life events shown so often on the small screen or in  newspapers, can a less-than-explicit but spooky little tale still speak to a modern audience?

In a word, yes,  And Britten's setting grows increasingly gripping in the second act, as the story drives towards its chilling denouement.

In the midst of everything else, the Vinaccesi Ensemble is in rehearsal with some great new northern-Italian Baroque repertory for our season finale in Berkeley on Sunday Aug.4 at 3 p.m. (1316 University Ave.).  Madrigals, canzonettas, and songs with Baroque guitar by Salamone Rossi, incomparable psalm settings by Benedetto Marcello--and a soupcon of Vinaccesi, natch.  Catch the musical worlds of Mantua (Rossi) and Venice (Marcello/ Vinaccesi) as they glide into the 21st century. Discounted advance tickets available.

What I'm reading: I've mostly been living in the land of YA, with.... Seraphina (a beautifully written, delightful and very relevant interspecies morality tale) Anna and the French Kiss (from a book exchange--wonderful to revisit Paris through its pages), and Veronica Roth's Divergent/ Insurgent dystopian pair--looking forward to the third of the series, Allegiant, due out in the fall.  Also reading some Joseph Roth, a grown up novelist :).

What I'm working on and listening to: Britten, Rossi, Marcello, Handel for September, Joseph Kosma, Gershwin, Vandor, Justus, and Zemlinsky for September in SF and October in Eastern Europe, and Hugo Wolf for the future.  A busy time :)!