It has been a shamefully long time since I last posted here: I vow to do better going forward! 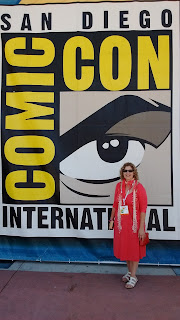 But it's been a very full, exciting and busy 15 months, with a performance tour in Hungary--for which I learned to sing in the beautiful but challenging language of Hungarian--recording a new CD, premieres of new music by Laura Schwendinger, William Ludtke, and David Garner, translating 4 middle grade novels and 6 middle grade graphic novels from Italian and French into English, a family reunion in NY, my normal performing schedule...and more. So hopefully you'll all forgive my absence on these blogging pages and understand the  hiatus.

Back to the present, I just returned from the annual craziness known as Comic Con, which was just as packed and huge as ever--possibly even more so. There's always some concern that it's gotten too big (legitimate) and that it's becoming too much of a pop culture haven (also legitimate), but it remains a fun and energy-packed time.  For me, it's a chance to check out the swag (books, books, and more books!), attend panels, see friends, and visit the SoCal wing of my family.  A shout out to First Second, which celebrated its 10th anniversary this year with not one or two but three Eisner Awards, for The Zoo Box by Ariel Cohn and Aron Nels Steinke, This One Summer by Mariko and Jilliam Tamaki (which I read earlier this year and recommend), and The Shadow Hero by the multitalented Gene Luen Yang whose Airbender: The Last Avatar, from Dark Horse was the other half of his best writer award; also to Graphix/ Scholastic for its Eisner-winning Sisters by Reina Telgemeier, and to all the other Eisner nominees and winners.  Now everyone gets to catch their breath until next year's Con.

It's less than a month until another big annual conference in SoCal, although one that's a little tamer than Comic Con, thank goodness: the annual SCBWI conference from July 30-Aug. 3. I'm thrilled to have been asked to give a workshop on translating, quite the honor, as it's the first time they're having a talk on the subject.  Check out Avery Udagawa's interview with me on the SCBWI blog if you feel like it...

In a far more sobering note, an important professor  of mine from grad school died this week at the age  of 81, Alan Curtis.  Alan had a major impact on  the early music movement, both at the keyboard  and also conducting Handel and Monteverdi.  And he had a major influence on me:  performing in the Collegium as a grad student with  him directing-- particularly my singing the role of Nino in Cesti's  Semiramide with the inimitable Elizabeth Anker-- was crucial in my decision to be an opera singer.  Requiescat in pace to him, and to also the towering  dramatic tenor, Jon Vickers, who passed away last  week.

Watch a marvelous interview with Alan Curtis  during recording sessions for Alcina in 2009, with Joyce Didonato and other wonderful musicians.

What I'm reading: all the marvelous books I got on Comic Con! More later...

What I'm listening to: the first edits of the JMPP's CD, to give feedback to our wonderful team of audio engineer, Jason O'Connell, and producer David Garner; Elektra (Strauss, for performing).

What I'm working on: new-to-me Bartok settings for 2015/16 concerts; the Fuenfte Magde from Elektra by Strauss for a concert performance in August.