This week's post is late--mea culpa! But the good outcome of my tardiness is that I can give you the live streaming link for Monday's concert if you can't be there in person, as I just received it...That link and the instructions are at the bottom of this post.

The concert? Ensemble for These Times' composer David Garner's Faculty Artist Series program on APRIL 4, at 8:00 p.m., Caroline Hume Hall at the SF Conservatory of Music. You can also read Stephen Smoliar's article in the SF Examiner about the concert here. Admission is free, but it's open seating, so David recommends folks get there early.This is a bit of a plug post--surprised?--but keep reading for interesting info about civil rights figure, Mary Pleasant.

Monday's concert features four works, all by David Garner:
First half:
* Vilna Poems (2014), with texts by Avram Sutzkever, sung by soprano Krista Wigle, and played by cellist Evan Kahn, along with members of the SF Conservatory Faculty.
* Mein blaues Klavier (My Blue Piano, 2015), with texts by Else Lasker-Schueler, performed by Ensemble for These Times, i.e., me, pianist Dale Tsang and cellist Laura Gaynon. This is on our new JMPP CD, Surviving: Women's Words, which will be for sale at the concert and is being officially released on April 8 on Centaur Records (Centaur CRC 3490), already available from the group or online for pre-release sales.
*Judith Masur Songs (2016), written for mezzo-soprano Crystal Philippi, to texts by Berkeley poet Judith Masur. 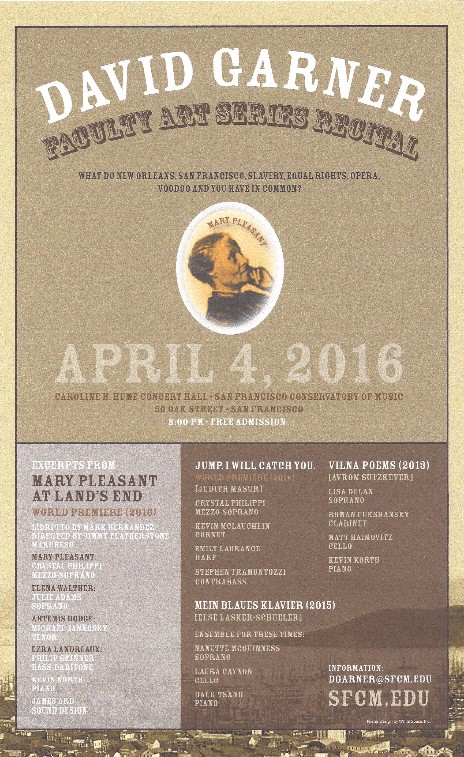 Here's what David writes:
"Mary Pleasant --one of the most complex, mysterious figures in the history of the nation--comes to life in Mary Pleasant at Land's End...with libretto by Mark Hernandez.  The opera traces much of Pleasant's astonishing life, beginning with her days as a shepherd for the Underground Railroad.  Arriving in San Francisco, she becomes a beloved leader in the young city. Eventually, this daughter of slaves stands as one of the richest and most influential individuals of the time. Her championing of people and causes, however, brings her into conflict with a familiar face of wealth and power, and the ensuing struggle plays out in a notorious courtroom drama that mesmerizes the public. Sensationalist press coverage demonizes Pleasant, playing on attitudes towards her race and gender. An essential figure in the founding of San Francisco, and indeed the state of Californi, she is forgotten even as the city bursts into world prominence..." More info at David's website.

If you can't come on 4/4x8 (i.e., April 4, at 8:00 p.m.),  you can watch the livestream. Streaming will start about 5 minutes before the concert. When it begins, you'll see "Live now" below the name, Caroline H. Hume Hall. Select it to automatically see the video with the live stream...at least in theory.

What I'm reading: M.T. Anderson's Symphony for the City of the Dead: Dmitri Shostakovich and the Seige of Leningrad; Elizabeth George's A Banquet of Consequences; Terry Pratchett's final Tiffany Aching novel, The Shepherd's Crown.

What I'm listening to: Mozart's Jupiter Symphony and Beethoven's First.  Also the many, many (did I say many? We received 275!) scores from E4TT's call for scores. Winners to be announced June 1.

What I'm working on: Mein blaues Klavier, of course, along with songs by Winterberg, Sharaf and Garner for April and May.

In honor of Brussels

Today's blog post: short, simple, and sweet but sad. A moment of silence in my tiny corner of the blogosphere for those who suffered or are suffering as a result of the bombs in the beautiful city of Brussels, Belgium.
Posted by Unknown at Tuesday, March 22, 2016 No comments:

March 14 is a verrrry popular birthday (three folks in my family own it, for example), but there are fewer famous folk with it than on some other days of the year.  However, one hugely famous Pi Day celebrity--for whom March 14 is a most appropriate birthday--is Albert Einstein (1878-1955).

Warning: shoals of a famous mathematical formula ahead, but the digression is brief. If desired, skip the next paragraph to avoid possible eye glazing.

(Einstein's special theory of relativity is represented mathematically with another constant, c.That famous formula? E=mc2, where E means energy, m means mass, and c means the speed of light in a vacuum, which is then squared. The constant, c, is NOT pi, but rather a little less than 300 million (299,792,458) meters/second, i.e., pretty darn fast!)

There are many great quotes attributed to Einstein, many nearly aphorisms. I find Einstein, his story, and his words infinitely inspirational--and I hope you will, too.

Here are a half dozen:

Insanity is doing the same thing over and over again and expecting different results.

Only two things are infinite, the universe and human stupidity, and I'm not sure about the universe.

Learn from yesterday, live for today, hope for tomorrow. The important thing is not to stop questioning.

We cannot solve our problems with the same thinking we used when we created them.

Anyone who has never made a mistake has never tried anything new.

Who are a few other less-scientific Pi babies?  Quincy Jones, Billy Crystal, and among musicians of olde, George Telemann.

What I'm reading: I just finishe Carry On by Rainbow Rowell (recommend by Lee Wind's excellent blog). It's a great book, even though or especially because--depending on your perspective--the title immediately causes the Styx song to stick in one's ear like an earworm. Speaking as one, mind you.

What I'm listening to: When "Come Sail Away" isn't running through my head....I was able listen to Schubert's Winterreise recently.

What I'm working on: David Garner's Mein blaues Klavier, for my next concert (April 4)--it's also on our CD that's coming out on April 8!!!--and songs by Hans Winterberg for May 31 and June 2.

The official UN theme for 2016 is "Planet 50-50 by 2030: Step It Up for Gender Equality" and the International Women's Day website encourages us all to Pledge for Parity (#PledgeforParity for the twitterati and instagramati). The TMI from the IWD's website reads: "Celebrate the social, economic, cultural, and political achievement of women. Yet let's also be aware progress has slowed in may places across the world, so urgent action is needed to accelerate gender parity. Leaders across the world are pledging to take action as champions of gender parity."

Looking back, the theme for 2015 was "Empowering Women, Empowering Humanity: Picture it!"  What a lovely picture it would be for the whole human race were empowered.

In 2014, "Equality for Women is Progress for All."  A near-tautology that is so very true.

And 2013? "A Promise Is a Promise: Time for Action to End Violence Against Women." Sadly, this is still only a dream not yet close to being achieved.

To some extent it both gladdens and saddens me that we set aside a day to celebrate roughly half the human race: gladdens, because celebrating women is, indeed, a wonderful thing to do; saddens, because the need to celebrate a segment of the population implies that it is still underappreciated, underpaid, undervalued, and--in parts of the world--downtrodden.  Gladdens, because it's great to set aside a whole day to think about women and their importance to their world; saddens, because, well, it's just one day, right?  Why not celebrate women year round?

What I'm reading: poetry by Paul Celan; sadly I have now finished the published Inspector Duncan Kincaid and Gemma James mysteries by Deborah Crombie and must wait until she publishes her next one sometime this year.

What I'm listening to: Mozart opera overtures, and the wonderful repertory sung by all the young singers. I evaluated over the past three weeks. Their music continues to resound in my ears and my mind.

What I'm working on: songs by Hans Winterberg and Mein blaues Klavier by David Garner
Posted by Unknown at Wednesday, March 09, 2016 No comments:

With yesterday having been Leap Day, it seems fitting to think about time...Missing time, lost time, and making up time... Leap Day allows us to find a place for the lost time in the Gregorian calendar,  so that "real time" and the calendar stay in sync.  Likewise, in my case, the month of February flew by so quickly, that I, too, am out of sync and need that lost time to catch up with promised answers and topics from previous blog posts. Hence today is a day for catching up on overdue promises...A bit of housekeeping, as it were, but hopefully a bit more interesting than housekeeping, both to do and to read.

First, where did that mysterious picture up top and from two weeks ago come from?

As the caption (omitted in the original post) says, this is the San Diego Zoo Safari Park, on an amazingly warm (84 degrees!) day in early February.

Moving on to the even more shamefully overdue promised story about the origins of Verdi's opera La Traviata from many weeks ago....

Like many operas--a topic to explore on another day and another post--La Traviata comes from a successful literary work in another genre, in this case, the novel La Dame aux Camelias by Alexander Dumas fils (1824-1895).  Dumas based his protagonist on a real-life Parisian courtesan, Marie Duplessis who, much like Verdi's Violetta, died of tuberculosis.*  (The story was turned into a play as well. The moral of the story here? Good tales bouncily bound across genre borders as easily as Peter Rabbit.)

La Traviata premiered in 1853 in Venice and was set, against Verdi's wishes, in the turn-of-the-previous-century past. It wasn't until several decades later that stagings of La Traviata were moved to the 19th century "present" as Verdi had desired.

As is so often the case, opening night was a bit of a flop, with the requisite booing, including ample criticism that the 38-year old soprano, Fanny Salvini-Donatelli (pictured here) was far too old and far too...ample to play a character who died of consumption, or even a woman who would have been appealing enough to be a courtesan.** Nonetheless, La Traviata soon grew to become one of the world's most beloved operas, and Violetta one of opera world's favorite heroines.

*Any idea whichother famous, equally beloved soprano character in 19th century opera also dies of TB? Comment if you do and feel like it!

**This is an old, regular cavil for opera: plus ca change, etc., it would seem. But in my opinion, unlike in musical theater, where looking the part is much more crucial, opera singers need first and foremost to sing gloriously; looks should be a distant second.

What I'm working on: David Garner's Mein blaues Klavier, which goes into rehearsal this week for a repeat performance on April 4--just in time for the CD release on April 8...
Posted by Unknown at Tuesday, March 01, 2016 No comments: