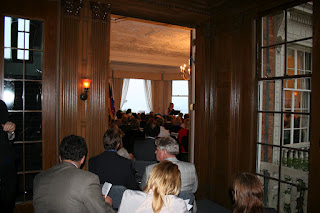 Even by my own occasional blog standards, it's been a shamefully long time since I've posted here, due primarily to a very busy performing year. The summer is looking to be a bit calmer, which will let me catch my breath, and--I promise--catch up here on my beyond-occasional blog.

In the meantime, above is a picture from the concert last month at the German Consulate General in San Francisco with Adaiha Macadam-Somer and Dale Tsang-Hall. Our new name is the Jewish Music & Poetry Project and we are performing in Berkeley in Aug. and Berlin in October. More on all that later, BUT as you can see, the concert was packed and overflowing, the audience was knowledgeable, generous, and appreciative, and the performance was a marvelous success.

Tiny plug: we are now a fiscally-sponsored affiliate of the SFFCM and are actively looking for donations (i.e., begging for your help) in raising funds to get us to Berlin this fall. Click HERE to make a tax-free donation, please!

Why post today, though, instead of any other random day in June...or May? Well, it's shameless plug time:

The Vinaccesi Ensemble, my Baroque chamber group will be performing at the Berkeley Fringe Fest this week: WEDNESDAY, June 6 at 12:30 p.m.

We have a great lineup and a great group...

What: Musical treats from the north Italian Baroque: a seldom-heard but stunning Monteverdi madrigal from Book VIII, arias and duets by Monteverdi, Cavalli, and Barbara Strozzi, and two new-to-the Fringe Fest cantatas by the quirky and creative Benedetto Vinaccesi, fresh from our recording sessions for our Centaur Records CD. Hope you'll be able to come!

~~~ What I'm listening to: the Vinaccesis this week, also gorgeous music by Elena Ruehr for August. What I'm reading: Death Cloud, a fun prequel to the Sherlock Holmes stories for young readers (Young Sherlock Holmes: the Adventure Begins, by Andrew Lane). Who was he before he grew up? Also Between Shades of Gray (by Ruta Sepys) a mesmerizing, stark look at the seldom-told story of the genocide by the Stalinist regime in the Soviet Union before, during, and after WWII. Beautifully written and researched, it is a multiple-hanky read that I'd delayed starting for weeks, as I knew it would be a horrendous tale. According to the notes at the end, some 20 million people were killed, including roughly 1/3 of the population of Lithuania, Estonia, and Latvia. Man's inhumanity to man never ceases to astonish me. Will we never learn?

Added note: Dora Sorell, Holocaust survivor and author of To Tell the Story, about Jewish life in Romania before, during, and after the war, will appear at the North Branch of the Berkeley Public Library (1170 The Alameda) on Saturday June 9m, 2-4 p.m.
Posted by Unknown at Monday, June 04, 2012 No comments: