Surviving: Women's Words and a play with few survivors

Stephen Smoliar in Examiner.com  describes "Surviving: Women's Words" as "a fascinating project within a project"--alluding to the fact that the project is itself a project of E4TT's Jewish Music & Poetry Project--and goes on to say that "...this album offers four passionate meditations on the Holocaust experience, delivered through a unique and highly compelling pair of voices, those of both composer and singer."

(For the curious, the CD's title, "Surviving," comes from the fourth song in the final cycle on the CD ("Song Is a Monument"), which sets words by Polish-American Holocaust survivor, Yala Korwin. We were honored to be able to use poems written by Korwin, who passed away in May, 2014, only two months after E4TT premiered the cycle. The other poets  whose texts are set muscially on the CD are Mascha Kaleko, Rose Auslaender, and Else Lasker-Schueler.)

"Surviving: Women's Words" is available from Amazon, HBDirect, Arkivmusic, and E4TT. Check it out now or starting May 13, when streaming and downloading will be available for purchase! 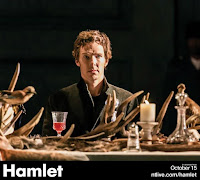 And the play with few survivors? Shakespeare's Hamlet, which I saw this evening in a fabulous production by the England's National Theater Live with the inimitable and multiply talented Benedict Cumberbatch (of "Sherlock Holmes" and "The Imitation Game" fame). 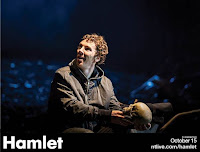 Partly a ghost stoy with a great fight scene, Hamlet is a "greatest hits" play, and deservedly so: much as the opera "Porgy & Bess" is filled with hit after Gershwin musical hit, so too is Hamlet filled with quote after famous Shakespeare quote.  The NTL's stunning production--albeit often very loud--brings out an important sequence in "Hamlet" about the army led by the character Fortinbras--well nigh the only principal character left standing by the final curtain, other than Horatio, whom Hamlet has begged to stay alive to bear witness to his story. 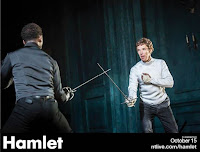 That sequence?  To set the scene, Hamlet has happened upon the Norwegian army on its way to attack Poland and asks the Captain what they're up to. The interchange:
"Hamlet: Goes it against the main of Poland, sir, Or for some frontier?
Captain: Truly to speak, and with no addition/ We go to gain a little patch of ground/ That hath in it no profit but the name./To pay five ducats, five, I would not farm it;/Nor will it yield to Norway or the Pole/A ranker rate, should it be sold in fee.
Hamlet:Why, then the Polack never will defend it.
Captain: Yes, it is already garrison'd..."

Thus does Shakespeare four centuries ago emphasize the insanity of war--so often waged for "a little patch of ground"--and the suffering that results, and that, you see, is the connection with the CD, as well.

What I'm listening to: Mp3 after mp3 for making the final vocal decisions for E4TT's call for scores :).  Plus the wonderful artist known as Prince, may he rest in purple peace.

What I'm working on: new music by Judith Shatin and Emma Logan, plus Hans Winterberg and songs by Vitezslava Kapralova

Today's post is a heartfelt farewell to the wonderful and wonderfully talented pathbreaking countertenor Brian Asawa, who passed away this afternoon (April 18)  at the age of 49 from  advanced cirrhosis.

Brian was the first countertenor in SF Opera's Adler program, the first to win the Metropolitan Opera National Council Auditions, the first to win Placido Domingo's Operalia, Seattle Opera's Artist of the Year award...his accomplishments are legion and myriad. He was also a kind, generous colleague. He was so very supportive to me at the memorial for  Zheng (mezzo-soprano Zheng Cao), and now sadly, the memorial will be for him.

You can hear two different sides of his artistry in Rachmaninoff (Vocalise):

and Handel (the gorgeous duet "Son nato a lagrimar" from Giulio Cesare):


And here, he is working with his (and my) voice teacher Jane Randolph, which is how I met him years ago.


As singer after singer after friend after colleague posts remembrances and farewell messages in social media, you can read a lovely tribute here.

The musical world mourns his passing.

In Praise of M.T. Anderson and his Symphony for the City of the Dead

First, a big shout out to all the wonderful performers and the enthusiastic audience at David Garner's fabulous Faculty Artist Series program on Monday night!  If you weren't able to join us, I hope you were able to watch the concert stream instead.

Leading up to Monday's concert, I could not put down M.T. Anderson's  YA historical novel, Symphony for the City of the Dead: Shostakovich and the Siege of Leningrad--a mouthful of a title that says it all.

Now, first off, I have to admit that I've been a fan of M.T. Anderson's books for years, beginning with his equally engaging dystopian Feed--written before dystopia had completely taken over as the style-du-jour, and Handel, Who Knew What He Liked and continuing with Strange Mr. Satie, Whales on Stilts, and The Astonishing Life of Octavian Nothing. (He has many more, but those are some highlights.)

Returning  to Symphony...What a brilliant concept! Who'd a thunk one could use the history of a 20th century classical Russian composer to talk about World War II?  It's an obvious call in retrospect, and beautifully done in Anderson's hands.  Symphony works well on a number of levels: at its core, it's a biography of composer Dmitri Shostakovich (1906-1975) combined with a history of the seige of Leningrad, and it's also a short history on the rise and continuation of Communism in Russia--all informed by and focused on  how both of the latter influenced this enigmatic, great composer who managed to survive in a situation where so many others didn't. (The photo to the right is the young, Harry-Potter-like composer at the age of 19.)

Anderson is honest in his evaluation of what Shostakovich may nor may not have believed and how the exigencies of pleasing Communist dictates may have affected his writing--questions I remember from my own readings in music history. He concludes that we may never know the whole truth in either direction. Nonetheless, we still have the composer's musical testimony, and now we have Anderson's commentary, along with his explanations along the way for non-musical young readers, about musical meaning and meaning in music (not the same thing) for his readers.

Perhaps best of all, reading Anderson's descriptions of Shostakovich's music makes the reader want to go and listen (or re-listen) to his music, especially his towering symphonies and string quartets. How terrific is that, when prose about music--or visual art for that matter--inspires one to go listen to the music itself!

Thank you, M.T. Anderson, for your latest work in cross-arts fertilization...the ultimate in coolth.

What I'm working on: Songs by Hans Winterberg, John Harbison and Frederic Sharaf.