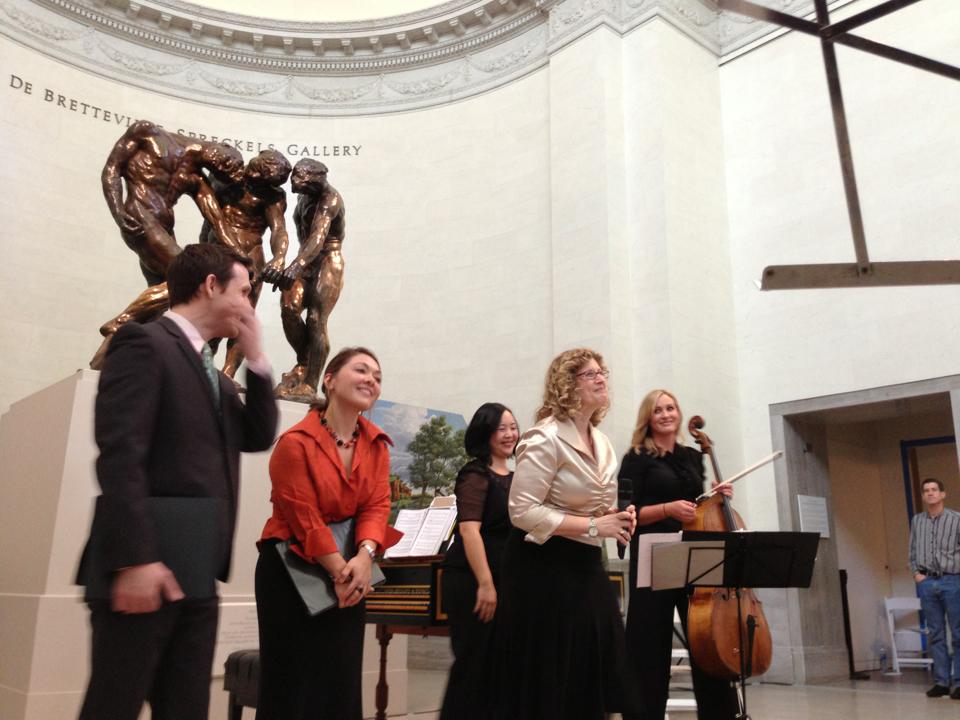 The Vinaccesi Ensemble at the Legion of Honor, at the end of our March 17, 2013, La Belle Vie concert.

Time for some more shameless plugs...

But first, for those inquiring minds who might want to know, the Vinaccesi Ensemble's concert was wonderful, with a large, generous audience, terrific presenters/ hosts (thank you, San Francisco Friends of Chamber Music and Legion of Honor!), a lovely space, and a wonderful harpsichord, courtesy of John Phillips.  A great time was had by all on both sides of the proscenium--not that there actually was a proscenium, mind you.  The picture above comes from a friend's iPhone, at the end of the concert.

And a quick note about a world premiere earlier this week, of Pulitzer-Prize winning and Grammy nominee Steven Stucky's The Stars and the Roses, beautifully performed by Noah Stewart and the Berkeley Symphony Orchestra, conducted by Joana Carneiro.  A shimmering three-song work (to poetry by the ever-wonderful Czeslaw Milosz) with transparent textures for the orchestra and lyrical writing for the glorious voice of the former Adler fellow. Stucky dedicated the piece to his about-to-be-wife, whom he charmingly told the audience he was flying off to marry after the concert: a sweet introduction to a lovely piece.

Back to the plugs...

Coming up this week, I've got two important events.  First, on April 1 (no fooling!), the Vinaccesi's premiere CD will be officially released on Centaur Records.  Benedetto Vinaccesi the Solo Cantatas contains all 8  extant solo cantatas by the group's namesake, that quirky, stylish and inventive Venetian composer.You can buy the CD from Centaur, directly from the ensemble, from Arkiv Music, etc. (Centaur CRC 3270).* 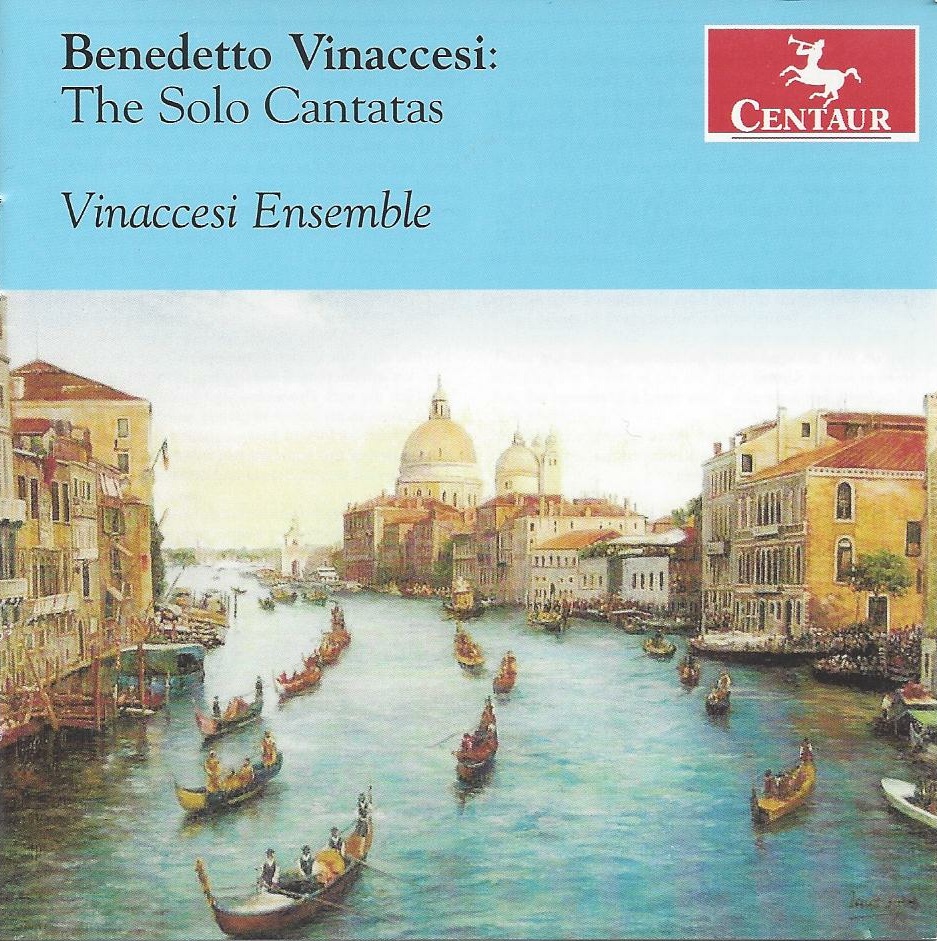 The CD includes the above musicians, plus bass Kirk Eichelberger and archlutenist Sarge Gerbode.

Hmmm, that's long enough for now.  Not to be tantalizing, but the next plug will come tomorrow or next day.  In the meantime, Happy Passover and Happy Easter to all.

What I'm reading: Sadly, I've now finished all the Martin Walker Inspector Bruno books that have been written thus far.  Hopefully there will be more soon.

Pick of the Week!

Just a quick note to all: the Vinaccesi Ensemble's concert on Sunday March 17 at the Legion of Honor at noon (see this morning's post) has been chosen as Locaphonic's Weekly Pick.  Check it out and spread the word, please!
Posted by Unknown at Friday, March 15, 2013 No comments:

Vinaccesi Ensemble at the Legion of Honor 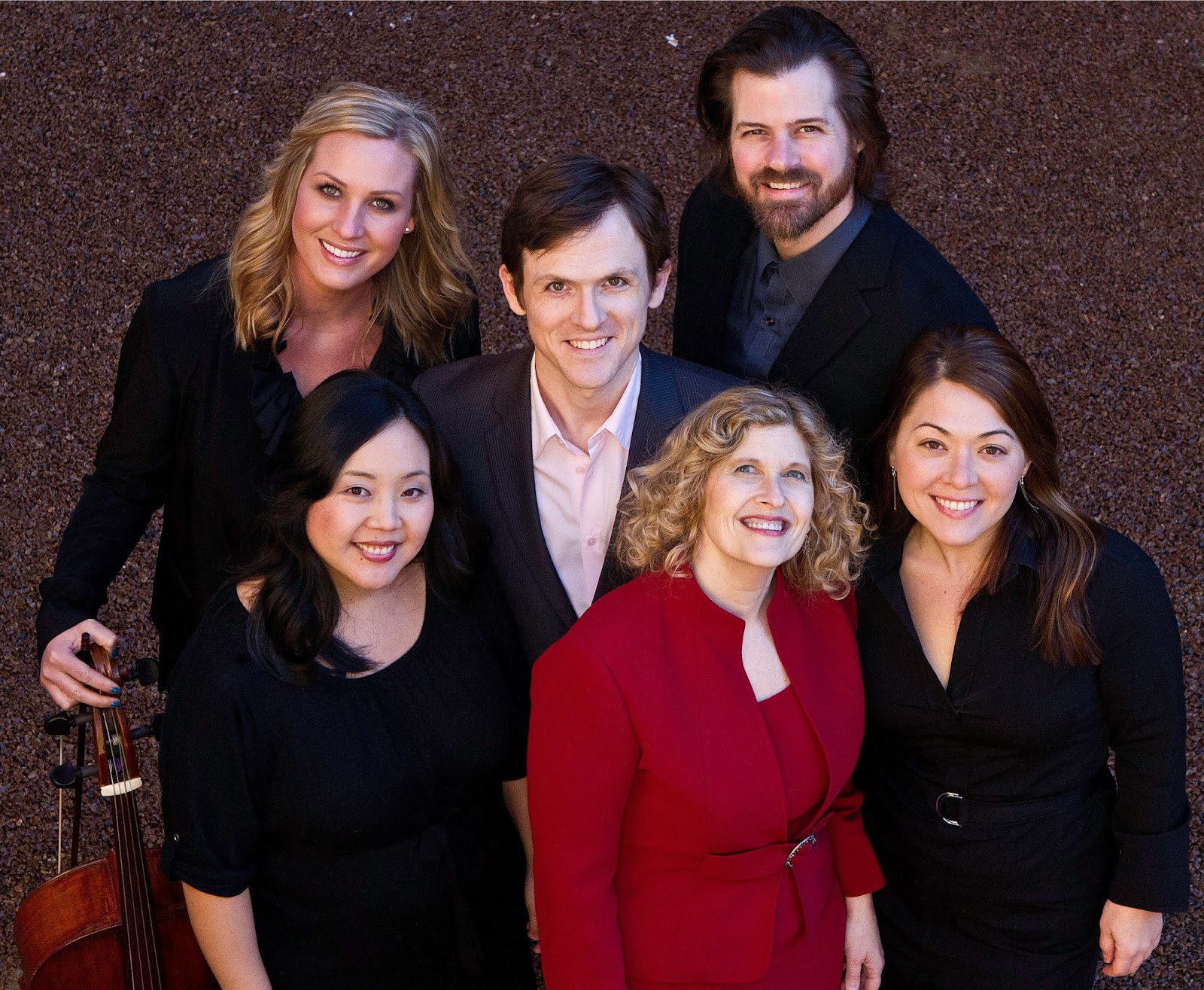 It's been an amazing 2013 thus far, with a plethora of fabulous musical events every weekend, so many of them performed by my wonderful colleagues.  So much good music, so little time...at the risk of sounding too   wide-eyed and "gee whiz" about things, the Bay Area is such a wonderful place!

Today's post is a last-minute shameless--or should I say shameful?--plug for this Sunday's concert that my Baroque chamber group, the Vinaccesi Ensemble, will be performing: March 17 at noon at the Legion of Honor in San Francisco.  It's part of the La Belle Vie 2013 series at the Legion of Honor, co-produced by the San Francisco Friends of Chamber Music and accompanies the Legion's exhibit, the Royal Treasures from the Louvre: Louis XIV to Marie Antoinette, which has just been extended to March 31.

For this concert, Vinaccesi Ensemble (me, mezzo-soprano Kindra Scharich, tenor Jonathan Smucker, Hallie Pridham, Baroque cello and gamba, and Susie Fong, harpsichord; our bass Kirk Eichelberger will be on the road and unable to join us) will feature music performed in Paris during the lifetimes of the Sun King and Marie Antoinette, that is, between 1630 and 1790, which will include pieces by Marais, Couperin, Rameau, Handel, de la Barre, Gluck, the young Mozart, and the ever popular Monsieur Anonyme, as well as a melody by the royal Sun King's father, Louis XIII.

Susie Fong will perform on a newly-completed harpsichord based on a 1707 Nicholas Dumont instrument by renowned Berkeley harpsichord maker John Phillips, who will discuss the instrument during intermission and after the concert.

AND...equally exciting, the Vinaccesi Ensemble's new CD--due to be released on Centaur Records on April 1, no fooling!--has shipped and is available for purchase from the ensemble and at the concert.  Benedetto Vinaccesi: the Solo Cantatas has all 8 extant solo cantatas by the group's inventive and stylish Venetian namesake. (More on this in a future post perhaps?)

As a quick side note, the 28th Jewish Music Festival in Berkeley produced the world premiere of David Garner's Vilna Poems, with texts by renowned Yiddish poet Avrom Sutzkever, to commemorate the 75th anniversary of the Warsaw Ghetto uprising.  Garner's compositions are always moving and ever-lyrical, and this song cycle--beautifully performed by Lisa Delan, soprano, Kristin Pankonin, piano, David Krakauer, clarinet, and Matt Haimowitz, cello--is no exception.  You can hear Garner's radio interview with Sarah Cahill on KALW in which he talks about about this and others of his pieces (including the song cycle of his I'll be premiering in April, "Phoenix"--but more about that on a future post).  The second half of the program centered on a breathtaking performance of Messiaen's  ethereal--and timeless--Quartet for the End of Time, by Krakauer, Haimowitz, Kay Stern and Kathleen Tagg.

As a second quick side note, I have several more belated and overdue topics for my always-occasional and ever-delinquent blog.  Perhaps the month of March will be a good one for slightly more timely posting, or at least catching up?  Time will tell... but as we're enjoying an early, lovely spring here in Berkeley, hope--at least in this blogger's heart--springs eternal.

And as a third and final side note, March 14 was my birthday (as well as that of my niece and my stepsister--three Pi day birthdays shared with Albert Einstein in one fabulous family ;)) and I wanted to thank all my  wonderful friends who wished me a happy birthday today!

The regular disclaimer: I'm talking about friends and acquaintances in this post...

What I'm listening to: Strauss, Wolf, Garner, Geist, Handel, Gluck, Mozart, Lomon, Ruehr, Golijov, Gabriela Lena Frank, and much, much more. This is a busy month!
What I'm working on: all of the above.
What I'm reading: Martin Walker's Black Diamond (the third in his excellent Inspector Bruno series); Cinda Williams Chima's Seven Realm series, and more....
Posted by Unknown at Friday, March 15, 2013 No comments: